Located in the heart of Gascony, the Armagnac vineyard covers 3 departments southeast of Bordeaux : the Gers, Landes and Lot-et-Garonne .

Capital : Eauze
Surface area : represents 67 % of the area identified as Armagnac
Soil characteristics : The ‘boulbènes’, characteristic sediment in the region are predominantly silty soils.
Eaux-de-vie : This zone produces light, fruity, delicate and highly reputed eaux-de-vie.
Particularities : The jewel of the appelation – its Armagnacs are famous for being the finest, according to connoisseurs.

Capital: Auch
Surface area: 1 % of the Armagnac area.
Soil characteristics : The hills are made of limestone and clay-limestone whilst the valleys are sometimes covered with boulbènes.
Particularities : The largest spread out are with the smallest production zone. 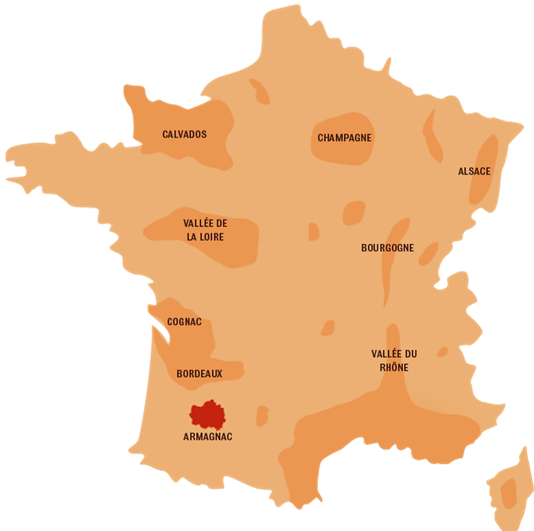 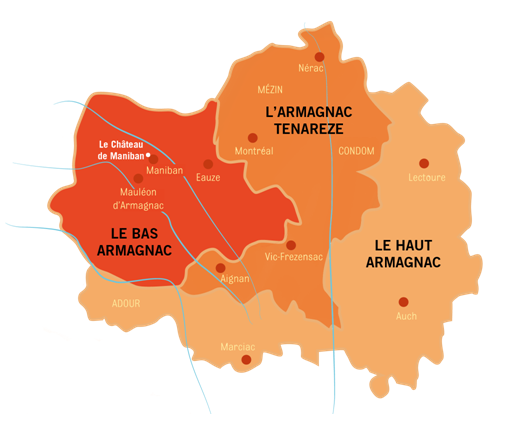 As Cognac, Armagnac is a distillation of white wine. There are 4 types of grape varieties.

Ugni blanc (also known as saint-emilion, dominant since the phylloxera crisis), Colombard, Folle Blanche, also known as  Piquepoult in Armagnac, dominant up to the XIXth century and Baco.

Baco (previously called « Baco 22A » )
A hybrid, being the by-product of Folle Blanche and Noah 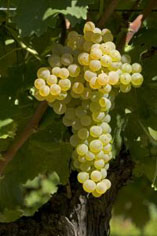 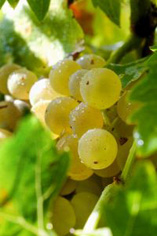 Eaux-de-vie : fruity and spicy aromas are prefered for blends
Culture : used and valued in the vinification of the Côtes de Gascogne wines

Folle Blanche- was called "piquepoult"
Historical grape variety for Armagnac - Cultivated in the vineyards before its destruction by phylloxera in 1878.

Eaux-de-vie : produces fine and floral eaux-de-vie with great elegance
Culture : Its cultivation on rootstock is more difficult and it is quite rare- Represents a small area.

The eau de vie is produced from white wine made with white grapes, with a good acidity and a low alcohol degree. The wine has a good capacity to preserve the freshness and aromas until the distillation process.

The white grapes harvested in September are pressed; the juice is then fermented in a natural and traditional way, without sulphur or sugar.

When the fermentation process is done, it is time for the distillation. Practiced during winter, the distillation should be over before the 31st of March following the harvest.

The Armagnac distillation is made with an Armagnac-type alembic.  The main characteristic of it is to be a continuous still.

Upon leaving the alembic, the eau-de-vie is transparent and very aromatic.

It is called Blanche Armagnac, a new A.O.C “Appellation d’Origine Contrôlée” created in 2005.

After the distillation, it is worked and the alcoholic degree is lowered in order to highlight its fruity and smooth aspects. To preserve all the aromas and retain its crystalline appearance , the Blanche is stored in stainless vats.

Blanche d'Armagnac is a white spirit, with fruity aromas and freshness.

To become a French brandy, the eau-de-vie needs the influence of the wood and numerous years of aging to develop its full richness. 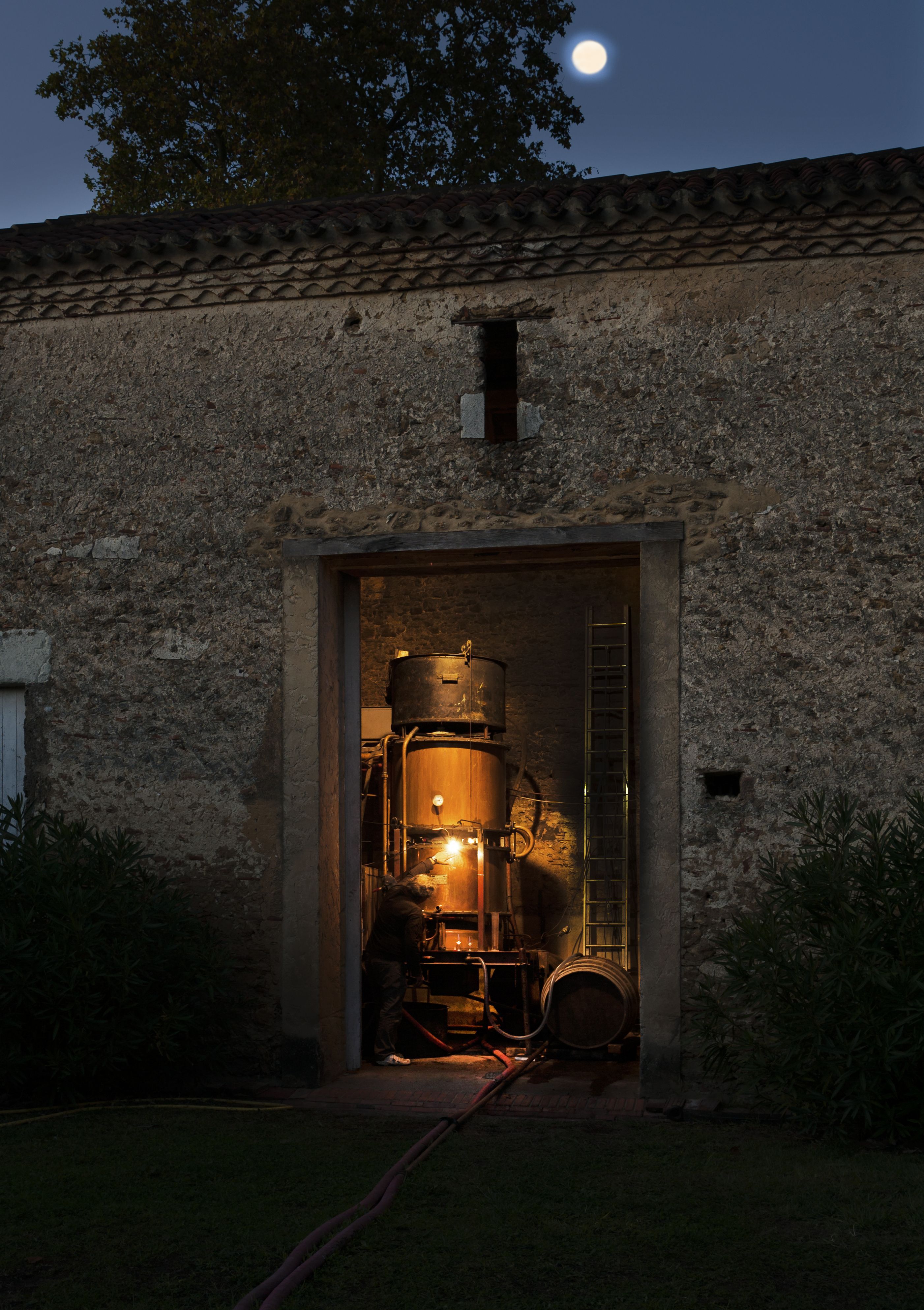 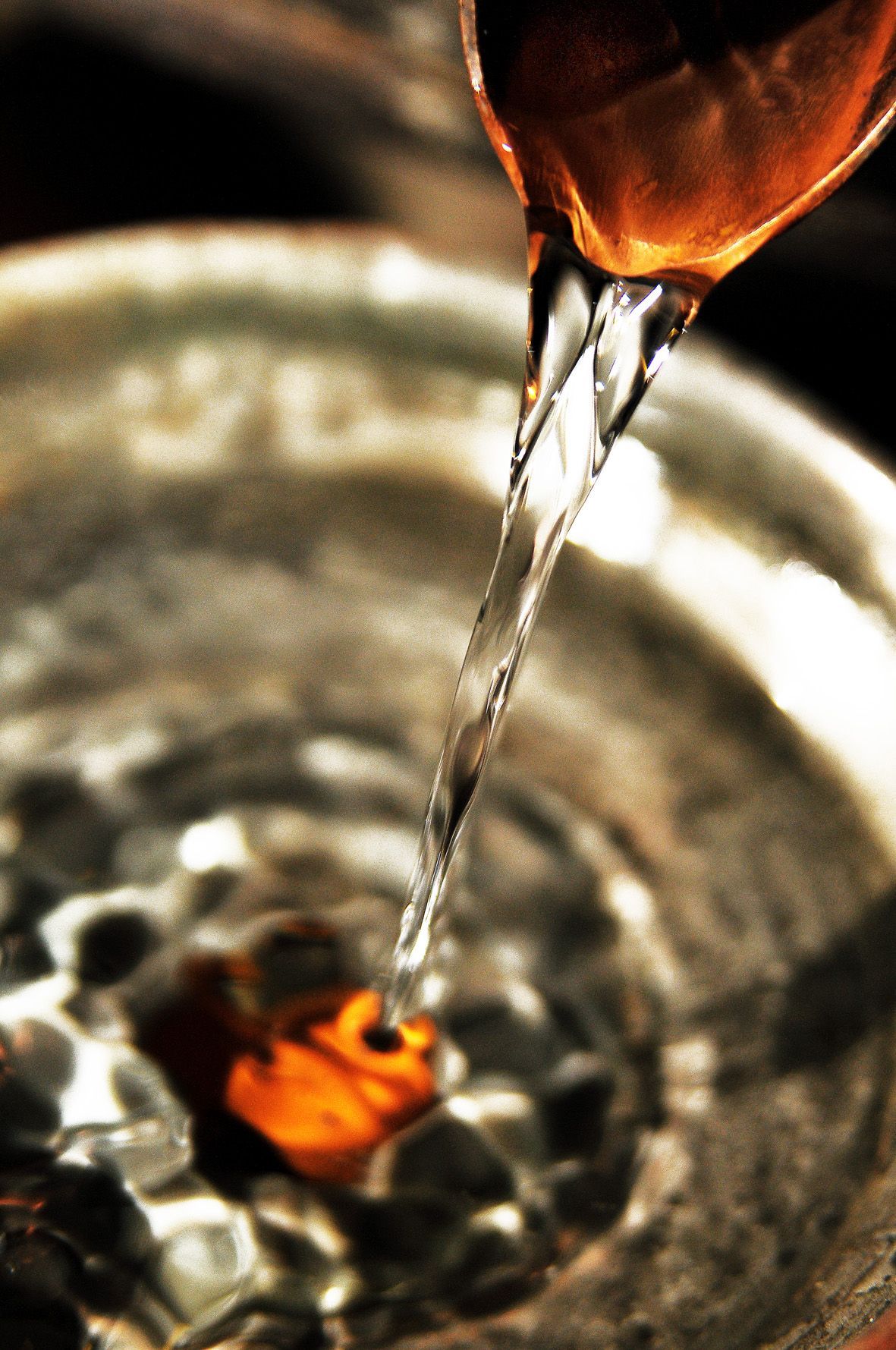 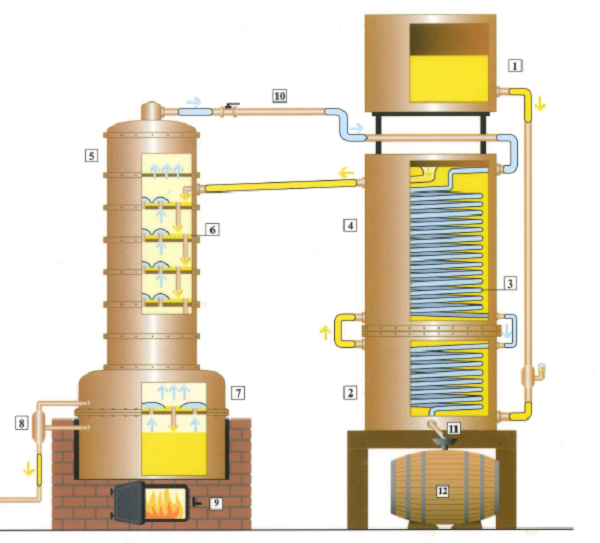 (1) Bring the wine of the year’s harvest

(4) Rising of the eau-de-vie vapors

(6) Transparent eau-de-vie leaves the alembic with an alcohol degree that varies between 53% to 60% vol.

Armagnac : its ageing in oak barrels :

An immutable process in several steps that takes place in a specific environment: the cellar

First stored in a new oak barrels with a capacity of 400 litres, during a few years, just until the optimal dissolution of the components in the wood, the eau-de-vie can then be transferred into older oak barrels for a slower ageing

This mysterious alchemy between the oak barrel, the cellar master's work and the cellar, gives each Armagnac its identity.

An important advice for the preservation of the bottles : Armagnac no longer ages once it is in the bottle. It is essential to keep the bottle upright to avoid any damage on the cork.

The blends, a secret know-how :

Once the cellar master considers that the ageing is sufficient, he will start ‘les coupes’, in other words, making harmonious blends of several eaux-de-vie of different origins and ages.

The level of alcohol for consumption (40% vol. minimum) can be achieved by gradually adding ‘petites eaux’ a blend of Armagnac and distilled water that is aged independently and used exclusively for reducing blends.

The vintage is a specificity in Armagnac that corresponds exclusively to the year of harvest.
he bottling date is handwritten on each vintage’s back label when it is ordered. Reducing vintages is often not necessary particularly if the cellar is humid so they are often available at their natural alcohol strength of ageing that is generally between 40% and 48% vol. Once in bottles, Armagnac no longer ages though it is important to keep the bottle upright so that the alcohol can’t attack the cork.

These references always correspond to the youngest eaux-de-vie in the blend.

They are generally presented like this: 20 years, 30 years, etc.

•  «VSOP»  is  a blend of eaux-de-vie of which the youngest has been aged in wood for at least 4 years.

• «XO» ou «Napoléon»,  is  a blend of eaux-de-vie of which the youngest has been aged in wood for at least six years.

• «Hors d'Age»  is  a blend of eaux-de-vie of which the youngest has been aged in wood for more than ten years.

Vintages have been aged at least 10 years minimum in wooden cask.
Specific to Armagnac the vintage corresponds to the year of harvest declared on the label (1934, 1965, 1976,...). 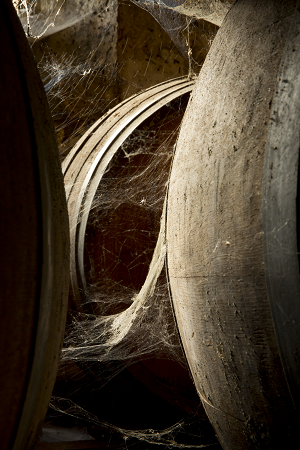 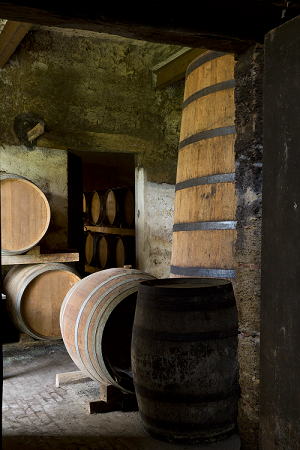 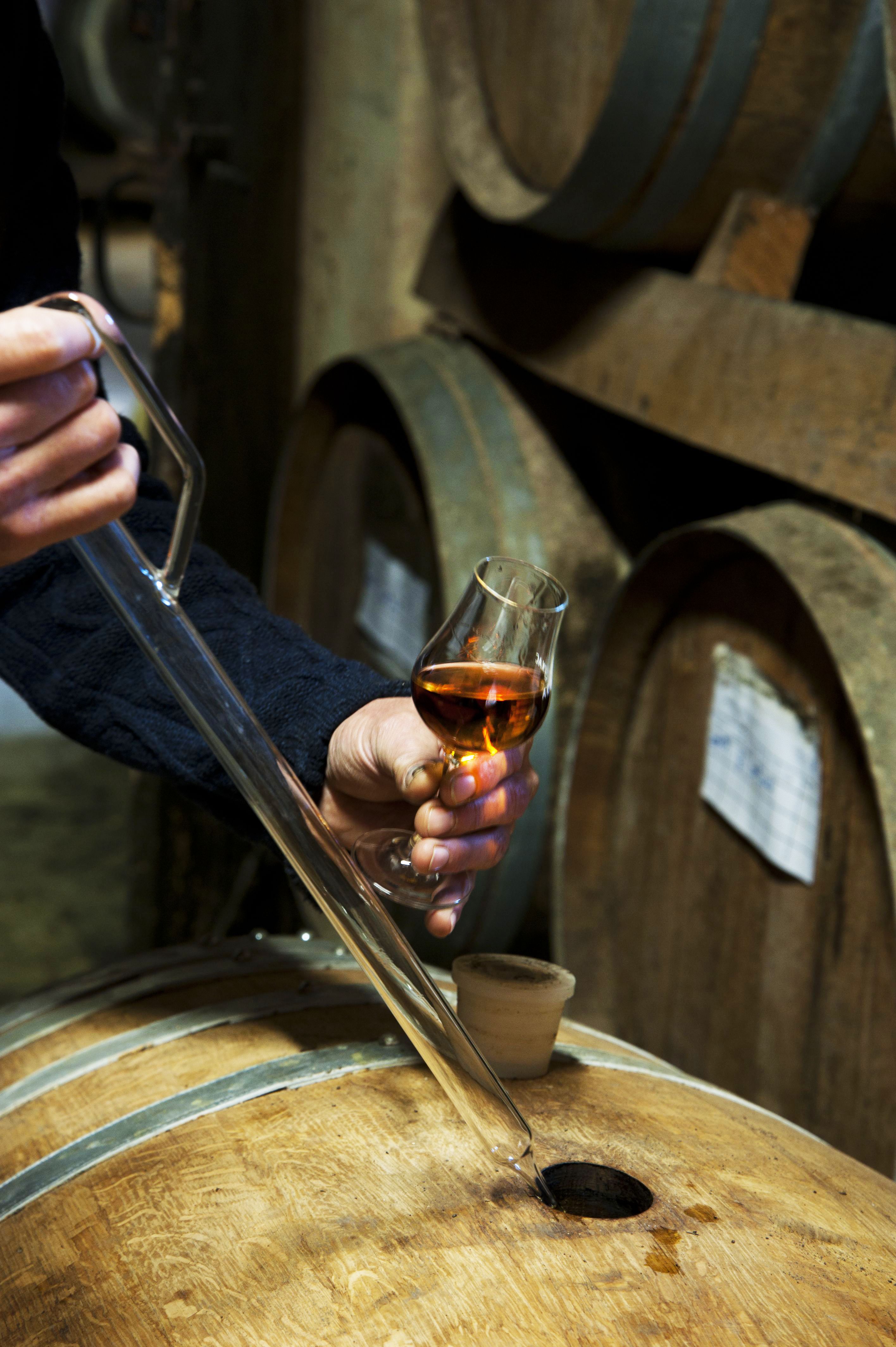 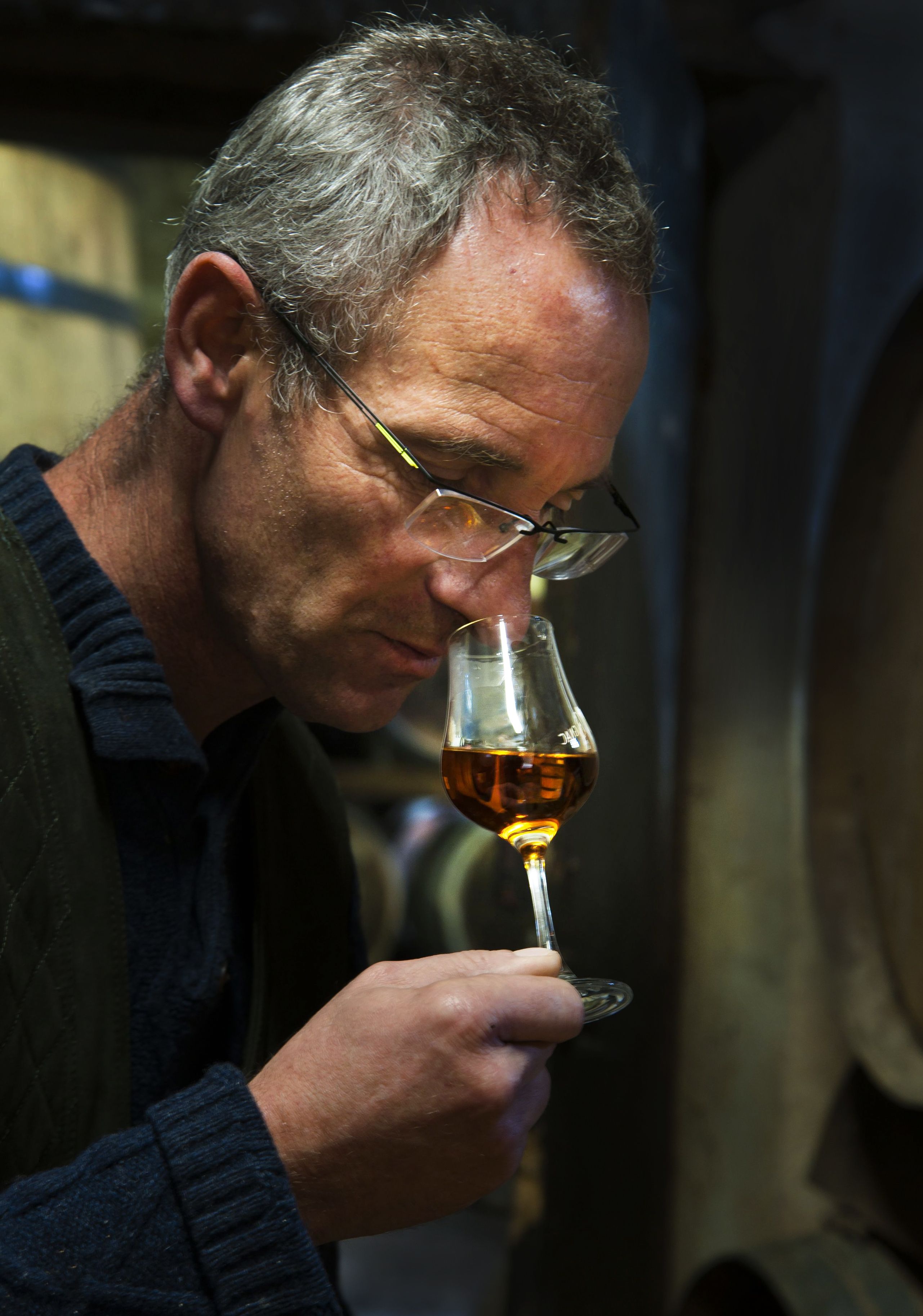